There was a flight to Peshawar when the plane took off from Karachi. Fifteen minutes later, some women’s screams started coming from the seat next to it. And the poor husband is being silenced by folding his hands.

The woman said, “If you want to adopt me, then divorce the first one, otherwise give it to me.” The husband kept begging her in hushed words. But she was becoming a tiger.

When the noise became too loud, the air hostess came. He asked the couple in a very professional tone what I could do for you. The woman shouted and told him to get rid of her. She left with her mouth closed. Husband’s condition was noticeable …

. When her chuckle exceeded the limit, my blood pressure began to rise and I got up from my seat and went to her and asked her what she thought of her. Said Begum. I said that if you are a big unscrupulous husband, don’t put your wife in the sky so much, put a slap on her face or do it.

The woman was about to shout at me, so I silenced her. Bibi, the family you belong to has found out that I am not your husband.

I have taken a ticket of 18,000 for your convenience, not to listen to your cricket commentary.

The other passengers also became my sympathizers. The woman also sat down.

I sat on the seat, stroking my mustache 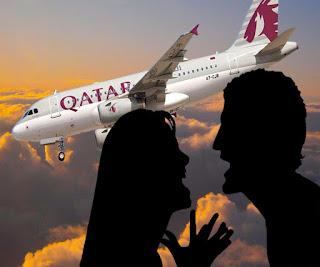