When he entered the house, he saw his wife sitting and crying

When he entered the house, he saw his wife sitting and crying.

Why are these eyes red?

Today, this bastard has killed this old woman again at the request of his wife

She is his mother, not yours

And then the good language will speak

Interfering in the affairs of the daughter-in-law

I told her grief to go wrong

Will the language work?

Would interfere in affairs?

You know something, this poor thing has a stroke

Needs support to get up and sit down

Stuck, she keeps her word

You never said he had a stroke before

I have told you a thousand times, but you have to remember nothing but clothes

Leave it at that, what can we do? 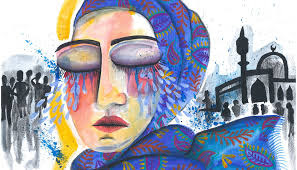 I tried to change the subject

What, what did he say?

Have gone crazy Trouble will embrace you. I was angry at the thought of that.

Just for a week … He ignored my anger and said … Maybe she was already planning everything.

no! No .. It’s impossible. And then why did he start giving his mother to us … I said .

His wife has said many times that she is old, she can’t be repelled, she is like a dog, she doesn’t even die. The wife said

Well, she says … I asked her to keep her heart.

Just accept it now and bring it to your home. Saying this, she came and sat beside me. And that is his dangerous attack, to make his point …

Well, now you are putting the responsibility of bringing this old woman home on me. And do you think that you can handle this? … I said

I don’t have any children, I do nothing at home except watching TV. Come on, she’ll come, and my heart will rejoice. He said sadly

We had been married for ten years. But there was deprivation of children.

I thought – let’s talk and see.

Which, his mother, would agree to give to us.

If you agree …? I thought

Still, it’s only a matter of a week …

If you later fall in love with yourself … Suddenly I thought …

If she hugs the old woman permanently … I expressed my concern to my wife.

This is a good thing. He said happily.

Tell the truth A woman is a fool. I thought in my heart …

The next evening, after much deliberation, I went to his house. Sitting in the drawing room, under the pretext of talking. He didn’t even ask for tea with a false face, so I told him according to my plan that my wife knows how to cure paralysis from the Holy Quran. And she wants to treat your mother

He was not happy about this. So I kept talking. The problem is that your mother has to stay at our house all week. Don’t worry, we will take good care of them. Hearing this, a mixture of embarrassment and happiness appeared on his face.

He agreed after a little discussion. I woke up and said that the treatment could take fifteen to twenty days. She felt even happier.

He said Saleem Sahib, I want my mother to get well, it will take a month.

And so, in this way, the mother remained with us permanently. The next day, the old woman moved into our house. What a wonderful way to screw people over. It was a white cotton ball. There was a lot of light. Lean, weak. Like the sorrows of all time, the light was written on his wrinkled face. Extinguished lamp Trembling lips

The condition worsened due to lack of proper food and care.

My wife was engrossed in her body, mind and music. Everything was bought new for him. Beds, blankets, sheets, clothes …

Didn’t know, month passed. At first, his daughter-in-law used to come every two days. Then there was a break of four days, then a week. Neither he nor we talked about taking Aman back.

She came only once in the second month. She kept crying about the busyness of the house. After the third month, she stopped coming. I told my wife that now, mother, it has become your responsibility, now you take care of it. The wife expressed happiness.

It was probably the seventh month that the man had been killed by his wife and later captured.

And so the mothers were left with only us.

On the other hand, as soon as Aman’s energy was restored and a smile began to appear on her face. By the way, my business started to grow. It was as if a song was falling on me. I had three shops throughout the year. In the third year, the three of us, me, my wife and my mother, had the happiness of Hajj. He bought a bungalow of 500 yards in Gulistan-e-Jauhar and shifted there.

Mother, stay with us for seven years, every moment they would pass by praying for us. And we, husband and wife, would not be happy.

۔ The strange miracle was that with the blessings and prayers of my mother, Allah Almighty blessed me with children.

They are not among us today, but they are sorely missed. Like someone lost something. We never even asked them their names. He just had a sincere relationship with them.

The other day, my wife was very happy. When asked the reason, she said. I have a dream …

I saw . That is the Day of Judgment. And everyone is standing in awe. Among them, I am also standing so much that my mother came and took my hand and began to say. Munira, come here, come with me, let me cross the bridge straight. I went with them, we passed through a garden, after a while the garden was over, then a big field came and the mothers started saying, that’s enough, cross the bridge straight. I was surprised. So she laughed out loud. Then my eye opened …

Congratulations Great dream but you didn’t think of me. ?

I swear I was so upset that …

let’s go . Well, we will also find someone who will cross the bridge straight.

Amen As the wife said from the bottom of her heart.

And then I didn’t tell her that I had seen it in a dream. The only difference was that my mother, holding my hand, said, “Let’s take you to Munira. She is waiting for you across the bridge.” ..!