KARACHI : Pakistan Tehreek-e-Insaf (PTI) leader and opposition leader in the Sindh Assembly Haleem Adil Sheikh has said that he would file a constitutional petition in the court tomorrow to disqualify Sindh Chief Minister Murad Ali Shah. The budget of Sindh has been presented by the Chief Minister who is accused of corruption and according to the report of the Auditor General, 1400 billion rupees of corruption has been committed in Sindh in the last 13 years, since the PPP government has been imposed on Sindh. It is dark. 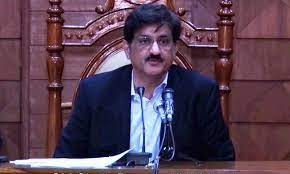 Addressing a press conference in Karachi, Leader of Opposition Sindh Assembly Haleem Adil Sheikh said that democracy was assassinated during the budget session three days ago. Today is the third day of democratic values ​​in Sindh. The virus has spread, democracy does not belong to their father, we will not forgive the killers of democracy.

He said that there is no member of opposition in the standing committees in Sindh, only Sharjeel Memon and Faryal Talpur are in PIC, cats and bats are sitting on milk protection, for the first time in the history of the country that Parliamentary leaders were not allowed to speak in the budget session.

He further said that after the martyrdom of Bibi, Bibi came to power through a slip, they will not be intimidated by anyone’s threats, life and death is in the hands of Allah, there is corruption in every institution of Sindh and we It has also been decided that one petition will be filed against each institution.