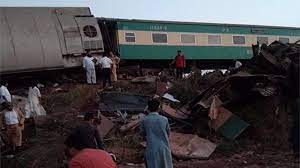 Lahore : All trains coming from Karachi and Quetta to Lahore were delayed for hours due to Tando Allahyar train accident. Khyber Mail is delayed by 8 hours and Allama Iqbal Express is delayed by 14 hours.
High speed train 9 hours, Green Line Express 8 hours 20 minutes, Awam Express 3 hours 40 minutes, Karachi Express 12 hours 20 minutes, Millat Express 10 hours 10 minutes, Pak Business Express 13 and a half hours, Sir Syed Express 9 hours, Farid Express 8 hours 10 minutes are delayed.
It is to be noted that Rehman Baba Express had met with an accident near Tando Allahyar yesterday. When Rehman Baba Express reached Tando Allahyar gate near Tando Adam, a truck loaded with gas cylinder collided with the train which blocked the up and down track. ۔
According to media reports, the driver and conductor of the truck fled the scene after the accident. The vehicle derailed a coach in the accident but fortunately no casualties were reported.