Kolkata : Leading actress and Trinamool Congress MLA Mamie Chakraborty in the Indian state of West Bengal was given a fake corona vaccine after which her health deteriorated. 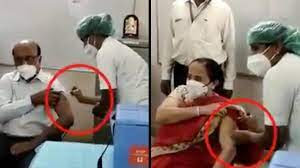 According to Indian media, Mimi Chakraborty had been vaccinated against corona in Kolkata but then her condition deteriorated. A close associate says Mimi has been suffering from abdominal pain, dehydration and low blood pressure since she received the fake vaccine. She already has liver disease and is taking medication.

The doctor who examined Mimi Chakraborty said that the actress was being treated at home, she was already suffering from liver disease, so the fake vaccine could not be immediately blamed for her illness.