Dream of winning series after 47 years in England Pakistan also gets the worst defeat by England’s “B” team, the English team has a decisive lead in the series.

Dream of winning series after 47 years in England

Pakistan also gets the worst defeat by England’s “B” team, the English team has a decisive lead in the series. 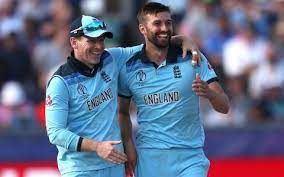 London: England’s “B” team won the ODI series against the national team by winning the second match of the three-match ODI series by 52 runs. In the second match of the series being played at Lord’s, Babar Azam won the toss and invited England to bat first. England’s first wicket against Pakistan was 9 runs, David Malan was caught by Hassan Ali without scoring a run, his catch was taken by Shadab Khan.
The second wicket was 21 runs, Zack Crowley was also dismissed without scoring a run, he was dismissed by Shaheen Afridi. The third wicket went for 118 runs, Phil Salt scored 60 runs and got out on the ball of Saud Shakeel. The fourth wicket fell for 134 runs, James Vance scored 56 runs and got out on the ball of Shadab Khan.
5th wicket fell to Ben Stokes, he scored 22 runs and got out on the ball of Hassan Ali. The sixth wicket fell to John Simpson, he scored 17 runs and got out on the ball of Hassan Ali.
The seventh wicket fell to Craig Everton at zero, he was caught by Mohammad Rizwan on the ball of Hassan Ali. Fast bowler Hassan Ali led 5 players to the pavilion, Haris Sohail took two wickets, Shaheen Afridi, Shadab Khan and Saud Shakeel took one wicket each. In reply, Imam-ul-Haq and Fakhr Zaman started batting for Pakistan.
In pursuit of the target, opening batsman Imam-ul-Haq failed again and returned to the pavilion after scoring just one run. Babar Azam scored 19 runs in the fourth over and became LBW. In the eighth over, Mohammad Rizwan was also left out for the team’s total score of 36. He scored 5 runs. Fakhr Zaman performed very poorly. He played 45 balls and scored only 10 runs and was clean bowled by Orton in the 13th over.
Sohaib Maqsood scored 19 and Shadab Khan 21 runs. Earlier, the toss was delayed due to rain and when the match started late, the innings of both the teams was limited to 47 overs. Both Pakistan and England did not make any changes in their final XI for the match. This is a memorable match for England’s acting captain Ben Stokes and he is playing his 100th ODI.
It may be recalled that in the last match played in Cardiff, England had defeated Pakistan by 9 wickets after a one-sided contest. Pakistan were bowled out for 141 in their first innings and England took a 1-0 lead in the series with a loss of one wicket. For the match, England consists of Ben Stokes (captain), David Milan, Phil Salt, Zack Crowley, James Vance, John Simpson, Louis Gregory, Craig Everton, Braden Cars, Saqib Mahmood and Matt Parkinson, while the Pakistan team consists of Babar Azam (captain). Fakhr Zaman, Imam-ul-Haq, Mohammad Rizwan, Saud Shakeel, Sohaib Maqsood, Shadab Khan, Fahim Ashraf, Hassan Ali, Shaheen Shah Afridi and Haris Rauf.