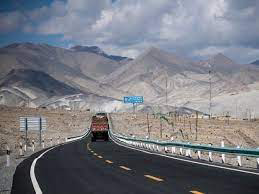 Islamabad :Beautiful and charming views of Karakoram Highway became the center of attention of people all over the world, Pakistan’s Karakoram Highway has been included in the 15 most beautiful highways in the world. According to WikiCampers, a well-known French website for tourism, entertainment and adventure, Pakistan’s Karakoram Highway has been included in the list of 15 most beautiful highways in the world.
WikiCampers is a world-renowned travel service website for mountains, beaches, deserts and other attractions that caters to adventurers around the world, including the United States, Europe, and Latin America. WikiCampers has released details on its website with beautiful pictures of the Karakoram Highway, saying that the Karakoram is the second highest highway in the world, built at an altitude of 4,693 meters. Joins
The website states that some of the peaks in the Karakoram mountain range are more than 7,000 meters high. The beautiful and charming scenery of this highway is ideal for tourists from all over the world including Pakistan. According to WikiCampers, Norway’s Atlantic Road is one of the most beautiful roads in the world. This 8.3 km long road is as beautiful as it is dangerous.
Although it offers a great view. The Atlantic Road is built on several small islands and cliffs and crosses several bridges. Located on the Italian-Swiss border, Colonel du Stelio Road is built at an altitude of more than 2700 meters, with about 60 turns offering mesmerizing views. Similarly, Dads Gorges Road is located in the east of Morocco, passing through various gorges at an altitude of 500 meters along the Dead Sea.
TF Santa Cruz de Tenerife Road is located in Spain. Spain has some of the most beautiful highways in the world, the TF436 road runs with a volcano and the view is unforgettable. Located in the Averon region of France, the Melo Viaduct is also an example of beauty. Designed by French engineer Michel Verloguez, the Melo Viaduct traverses the Tarn Valley at a length of 2,400 meters and a height of 343 meters.
Ice Fields Permond in Alberta Canada, also known as Auto Right 93, is one of the most beautiful roads in the world. It connects Lake Louise National Park in Banff National Park, Canada. Located in Salta, Argentina, the Ord N40 is one of the longest and most beautiful roads in the world.
The scenery is amazing and varied. The Second Pass in South Africa is a road mountain pass that crosses the border between South Africa and Lesotho. Similarly, the Denali Highway or Alaska Route 8 is a 218 km long road, surrounded by many civilizations, and is ideal for observing wild plants and animals.
It should be noted that Pakistan has a ground connection with China. It is also called the Karakoram Highway and the Silk Road. It traverses the world’s great mountain ranges, the Karakoram and the Himalayas. It is 4693 meters above sea level at Dara Khanjarab. It connects the Chinese province of Xinjiang with the northern parts of Pakistan. It is the highest international highway in the world.
It was completed in 1986 over a period of 20 years. It was built jointly by Pakistan and China. 810 Pakistanis and 82 Chinese gave their lives while building it. Its length is 1300 km. It starts in the Chinese city of Kashgar. It then passes through Hunza, Nagar, Gilgit, Chilas, Dasu, Besham, Mansehra, Abbottabad, Haripur and meets GT Road at Hassan Abdal.