Another daughter of Pakistan illuminated the name of the country 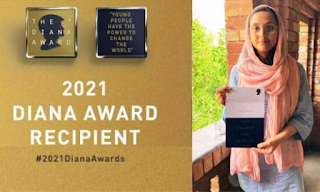 Lahore: Another daughter of Pakistan made the country famous, Lahore’s youngest student won the ‘Youngest International Lady Diana Award 2021’, 16-year-old student Iman Jawad won the Youngest International Lady Diana Award 2021 on the basis of social work. What According to media reports, Iman Jawad from Lahore started making pressure garments to help in the treatment and rehabilitation of fire victims and this service to the people became a global success and recognition for Iman as Youngst International The O-Level student was selected for the Lady Diana Award 2021 for providing more than 1,200 “pressure garments” to 700 fire victims.
Iman Jawad said that the cost of making a shirt of pressure garments is 10 to 15 thousand rupees and all these expenses are borne by Iman Jawad with the help of donors. As a child, she used to go to ‘Burn Ward’ with her doctor mother. Seeing the condition of the burnt people there, the spirit of helping them arose.
On the global acceptance of her daughter, Iman’s mother said that if everyone, like their sons, pays attention to their daughters ‘education, they will surely be proud of their decision like them, pay attention to their daughters’ education so that they can have a future. I can do something good for myself, for my family, for my country.