If it was in my authority Hassan Ali would be captain of the national team: Shoaib Akhtar

If it was in my authority Hassan Ali would be captain of the national team: Shoaib Akhtar 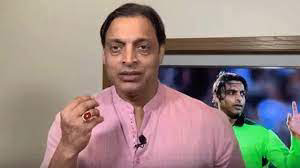 Lahore: Former speed star Shoaib Akhtar believes that fast bowler Hassan Ali would have been a better choice as the captain of the national team instead of the current captain Babar Azam. Talking to PTV Sports, after Pakistan’s ODI series loss against England, Shoaib Akhtar said that he would have focused more on making Babar Azam a great batsman instead of putting the burden of captaincy on him.

“I would have played Babar Azam only as a batsman. If I had to choose a captain from this team, he would have been Hassan Ali because he has a fire and intelligence. He would make and put pressure on him to play a special kind of innings so that the entire Pakistani team would play around him.
“I would compete with these Pakistani players like Ken Williamson, Virat Kohli and Ben Stokes and encourage them to be better than these players. I would have taken Babar Azam this way but unfortunately we still have a very sad scene,” he said. Pakistan has lost the series and it is very disappointing, thankfully there would be no Test match against England otherwise they too would have ended in just 2 days.
Shoaib Akhtar also highlighted Pakistan’s views on modern day cricket. He said that England is playing a different brand of cricket while Pakistan is stuck in the 70’s, we are playing black and white cricket and at the same time other teams have gone far ahead of us. It may be recalled that in the second ODI played at Lord’s on Saturday, England’s B team defeated Pakistan by 52 runs to take an unbeaten 2-0 lead in the three-match series.