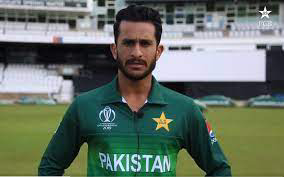 LAHORE: National team fast bowler Hassan Ali has bagged the most unique award in the 145-year history of international cricket. Hassan Ali, 27, bowled brilliantly in the second ODI against England, taking five wickets for 51 runs and then completing a hat-trick of sixes in an over by league sniper Matt Parkinson, the 145-year history of international cricket. I became the first player to take a hat-trick of sixes after taking 5 wickets in a match.
Rejecting the pressure, Hassan Ali batted aggressively and scored 31 runs off 17 balls, including three sixes and two fours. It may be recalled that the second ODI of the three-match series between England and Pakistan was played at Lord’s Cricket Ground.
The Pakistani bowlers performed well in the match and sent the entire English team to the pavilion for 247 runs in the 46th over. However, due to the failure of the batting line, Pakistan was once again defeated.
The Pakistan captain won the toss and invited the English team to bat first. England gave Pakistan a target of 248 runs. In reply, Imam-ul-Haq and Fakhr Zaman started batting for Pakistan. In pursuit of the target, opening batsman Imam-ul-Haq once again failed and returned to the pavilion after scoring just one run while captain Babar Azam was also the guest for 19 runs.
Babar Azam scored 19 runs in the fourth over and became LBW. Mohammad Rizwan was also left behind in the 8th over for the team’s total score of 36. He scored 5 runs. Fakhr Zaman performed very poorly. He played 45 balls and scored only 10 runs and was clean bowled by Orton in the 13th over. The players kept returning to the pavilion one after another. Shoaib Maqsood scored 19 and Shadab Khan 21 runs.
By the end of 24 overs, six Pakistani players were out and the team’s score was 115. Faheem Ashraf was out in the 27th over and Hassan Ali in the 30th over. Faheem Ashraf played under intense pressure. He played 9 balls and scored only one run while Hassan Ali rejected the pressure and batted aggressively. He scored 31 runs off 17 balls, three sixes and two. Also put squares.
He came after Faheem Ashraf and he increased the team’s score from 118 to 152. Pakistan’s ninth and most important wicket fell to 192 in the 39th over. Saud Shakeel was caught for 56 off 77 balls. He also hit four fours. In the 41st over, Pakistan’s last wicket fell on the team’s score of 195 runs. Harris Rauf returned to the pavilion with a run. As a result, Pakistan chased the target of 248 runs and failed 7 overs ago and lost by 52 runs.
On the bowling side, Englishmen Lewis Gregory took three wickets, Saqib Mahmood, Craig Overton and Matt Parkinson two wickets each while Braden took one wicket. Saqib Mehmood bowled 8 overs and gave only 21 runs. It should be remembered that the match was delayed due to rain and was limited to 47 overs instead of 560. Earlier, the English team started batting first then the previous match Heroes David Millan and Zack Crowley returned to the pavilion without opening an account.
Phil Salt and James Owens scored half-centuries, with Salt scoring 60 and Vance 56. Captain Ben Stokes could not make his 100th match memorable and was the guest of 22 runs. John Simson (17) and Lewis Gregory (40) were all out while Braden Chris (31) was the leading run-scorer. Hassan Ali (5), Haris Rauf (2), Shaheen Afridi, Shadab Khan and Saud Shakeel took one wicket each. It should be noted that England had defeated Pakistan by 9 wickets in the first ODI.