This sir revolves here as a crown prince, but how looking for a job is being expelled in the United States: The tweet of shahbaz gill. 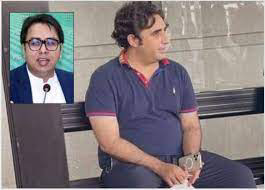 ISLAMABAD: Shahbaz Gul’s satire on the photo of Bilawal Bhutto’s protocol made at the US airport. According to the details, the photo taken to the airport went viral on social media after Pakistan Peoples Party Chairman Bilawal Bhutto Zardari arrived in the United States. A sarcastic tweet was taken by the leader Tehreek-e-Insaf Shahbaz Gul regarding this photo.

Shahbaz Gul said, “These are the gentlemen who walk around here as crown princes. They have spectators. But how are they going abroad in search of jobs. Sometimes on this bench and sometimes in this corner.” This is what happens when there is only one slip on the CV. ” On the other hand, Federal Minister for Information and Broadcasting Fawad Chaudhry also criticized the ongoing election campaign of opposition parties in Azad Kashmir and said that Bilawal Bhutto Zardari has fled the field and soon Maryam Nawaz will also flee.
The election campaign is underway in Azad Kashmir and the position of the Pakistan Tehreek-e-Insaf (PTI) government is stable. PTI is the only party that has been able to field candidates in all constituencies of Azad Kashmir. No other party has been able to field candidates in all constituencies. The Federal Minister for Information and Broadcasting said that PPP Chairman Bilawal Bhutto Zardari left the field because he found out that there were no candidates there and there were 8 candidates in total.
He said that this was the reason why Bilawal Bhutto Zardari failed and he ran away leaving his campaign incomplete. On the other hand, Maryam Nawaz is running a campaign, she also has no policy and she does not know the history of Kashmir. She said that Maryam Nawaz does not know how many times the relations between Pakistan and India have changed. Yes, they do not even know how many sacrifices Pakistan has made for Kashmiris.
Maryam Nawaz is campaigning there, she has no head and no legs, so the PML-N has already started shouting about election rigging because her political position in Kashmir is almost non-existent. Is equal to You will soon see that Maryam Nawaz will also run away from the campaign.