Billions of rupees were taken out of the pockets of the people by subsidy, Dr. Shahbaz Gill

Dr. Shahbaz Gul, Special Assistant for Political Media, said that billions of rupees were taken out of the pockets of the people by giving subsidies. 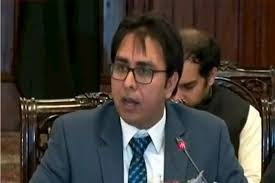 According to details, Dr Shahbaz Gul, Special Assistant for Political Communication, while reacting to Maryam Safdar’s statement, said that Mian Mafroor had given billions of rupees in subsidies to his sugar mills including robberies in Sindh.

The Special Assistant for Political Media said that Kashmir was ruled by incompetent people in the last five years. Caliber Queen should tell the Kashmiri people about her worst performance.

Dr. Shahbaz Gul said that the people of Kashmir should be told the story of increasing the current account deficit to 19 19.2 billion. The incompetent League has reduced its foreign exchange reserves from 18 18 billion to 7 7 billion.

He said that today the total foreign exchange reserves of the country have reached .3 24.31 billion. Imran Khan is the ambassador of Kashmir and will continue to give Kashmir its status.